"An honest and impressive documentary"
movie2movie 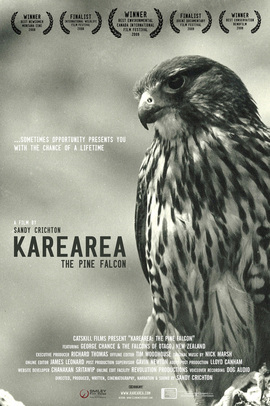 Official Selection at over 60 film festivals worldwide and winner of 27 awards including 'Best of Festival' and 'Best Cinematography' at Reel Earth Environmental Film Festival 2009.

This multi award-winning documentary, also released under the title "Chance of a Lifetime," tells the extraordinary story of how a population of wild New Zealand falcons have managed to survive in the face of fierce commercial forestry logging practices. It also tells the story of two friends - conservationist and director Sandy Crichton, and 88-year-old wildlife photographer George Chance. Bound by their mutual love and admiration for the falcons, Chance's failing health and eyesight inspires the young Crichton to capture footage of the falcons as a tribute to the latter's body of work from the 1970's. What begins as an empathetic response to fulfil a friend's final wish to see the magnificent birds on film ends up becoming the chance of a lifetime. When Crichton begins filming the falcons, he inadvertently becomes witness to new falcon behaviour, capturing a turning point in the ecological evolution of the wild birds.