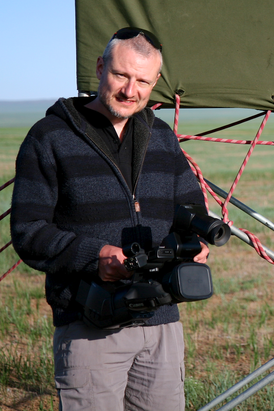 Sandy Crichton is an award winning Scottish filmmaker with a proven track record as a conservationist and protected species consultant. He has a wide range of interests in factual programming including natural history, social and observational documentary. A graduate of the world renowned Postgraduate Diploma course in Natural History Filmmaking and Communication at the University of Otago on New Zealand’s South Island, Sandy has also worked for two of the world’s leading producers of factual television, Natural History New Zealand (NHNZ) and the BBC Natural History Unit. His area of expertise is in making highly visual, unique documentaries with compelling narratives; the wildlife films he has worked on tend to have strong central human characters and are often driven by their personal stories.

In 2008, after more than 4-years in the making, he completed the environmental documentary Karearea: the pine falcon (aka Chance of a Lifetime), which went on to screen at over 60 film festivals worldwide, picking up 27 awards and a host of nominations in the process. He has worked on a number of other projects but the falcons of Otago will always hold a special place in his heart.

He is still actively involved in conservation in New Zealand through his role as Trust Manager for the Native Forest Restoration Trust, one of New Zealand's leading non-government organisations involved in native habitat protection and restoration.

Karearea: the pine falcon is the first film about the iconic New Zealand falcon that looks specifically at its survival strategies in a changing landscape, revealing how the falcons have adapted to live in commercial pine plantations throughout New Zealand.

During three years of filming I took on the dual roles of filmmaker and falcon consultant to Wenita Forest Products, the owners of pine plantations throughout the South Island of New Zealand. I was often called upon by Wenita to survey areas where falcons had nested perilously close to felling operations. Over time, and as a direct result of increasing awareness through the making of the film, more nest sites were reported and consequently protected. I co-wrote a ‘best practice’ work strategy, which is still helping to protect falcon nests throughout the region of Otago to this day.

In the pursuit of adding motion to George Chance’s wonderful collection of New Zealand falcon photographs I gained many magical memories. However there were also some incidents I’d rather forget, such as rolling and writing off a perfectly good (if a little old) Mitsubishi Pajero. Falling from a ledge and tearing medial knee ligaments whilst being subjected to a particularly ferocious falcon assault is also a memory I’d rather forget.

I think the one aspect that gave me the most pleasure was watching the juvenile falcons develop into young adults; for me their charisma is up there with the meerkats of the Kalahari and I still smile when I think about some of their antics. It did however take me two breeding seasons to develop my field craft to such a degree that I could actually get close enough to observe their development. It wasn’t until the third breeding season that my quest to get closer to the falcons to do justice to George's photographs finally paid off, and I found myself in the privileged position of being accepted by a young falcon family. That acceptance led to the behavioural revelations you see in the film.

It may seem an unnecessary statement but unlike many wildlife images used in other natural history documentaries the falcons filmed for Karearea are all wild falcons; the falcon footage used in the film represent three breeding seasons and over 100 hours of filming.

Sadly, central character George Chance passed away one week before the completion of the film but I know that helping me make the film gave him a huge amount of pleasure. I will always be grateful to George and his wife Hilary for making me feel so welcome at a time in their lives when they could easily have declined. I hope the film serves as some sort of a tribute to the life of a great New Zealand Photographer and a man I was honoured to call a friend.